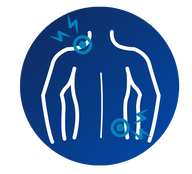 Fibromyalgia is primarily a central nervous system that has a primary feature of central sensitization. One of the mechanisms of this is mitochondrial dysfunction, which means (at the cellular level), the body does not produce enough energy. This creates the four hallmark features of fibromyalgia- fatigue, widespread pain, difficulty sleeping, and difficulty concentrating. People suffering from fibromyalgia often have other symptoms, but these are the four hallmarks that virtually all people suffering from fibromyalgia have.
​
While there is no known cure for fibromyalgia, physical therapists and functional pain managers can achieve great results by decreasing the pain and stiffness of those suffering from fibromyalgia. Improving sleep and grading exercise and activity are often the two essential areas that we need to make the most significant change. At Rainey Pain & Performance, we have several ways to help with this. One of them is our full-body fibromyalgia stretching and end-range strengthening program that leaves people feeling invigorated.
"I am a Gulf War Army veteran. I have seen nine physical therapists between Sierra Vista, AZ and Ft Myers, FL while I was struggling with Fibromyalgia since Nov 2001 (9/11 year). I stopped seeking physical therapy treatment about five years ago. Then, a pain doctor from Ironwood Clinic at the VA in Tucson suggested that I try the dry-needling therapy since dry-needling seemed to be the only treatment I hadn't tried thus far. Of course, I was skeptical because I had several Acupuncturists worked on me with not-so-successful results. Besides, I was not aware that PTs used needles in the treatment. I asked myself what I had to lose by trying dry-needling when I went to Rainey Clinic. I admit I was quite impressed with the first visit, especially by the way Dr. Rainey evaluated me and the treatment he was giving me. He focused on decreasing my pain level in the first 3-4 visits before proceeding to other aspects of concern, such as low-energy, insomnia, and depression. I also received the treatments by Dr. Davis. He was somewhat different, which was a good approach to my condition. What I like most about them is they did not just stop at therapy that day. Dr. Rainey and Dr. Davis kept trying to find better methods to treat me as they researched topics pertaining to fibromyalgia."
~S. Chang, CW3, USA, RET